This work is licensed under a Creative Commons Attribution 2.5 India License.

it happens over and over again, associations broken once more.

it happened last week again, one of my close colleagues left for another job. he and i happen to be the only one who know the history and influence of a campaign. his cubicle next to me is now vacant and void of his presence. i hope there will be a time again in my life, that would be so rich in narratives, bizarre concepts and discussions around the feeling of not knowing oneself and a sincere effort in breaking the mold. the triggers to activate forgotten stories and artifacts and strategies that have worked and failed are all partially lost.

i left college and after a year i visited the campus again, the feeling of being an outsider overwhelmed me. i could actually see my friends faces from the past at the familiar corners, around the corridors, and in the common bathroom mirrors, but none are there and will never be.

I created a custom search engine combining blog rolls of people I follow as Knowledge Space Search on Google.

Testing time for the engine…I have google versus my search engine well which is also on Google, but only I understand my context better than how google understands my search term. Here it is, I tried with the popular term in KM circles, Safe Fail comparison below 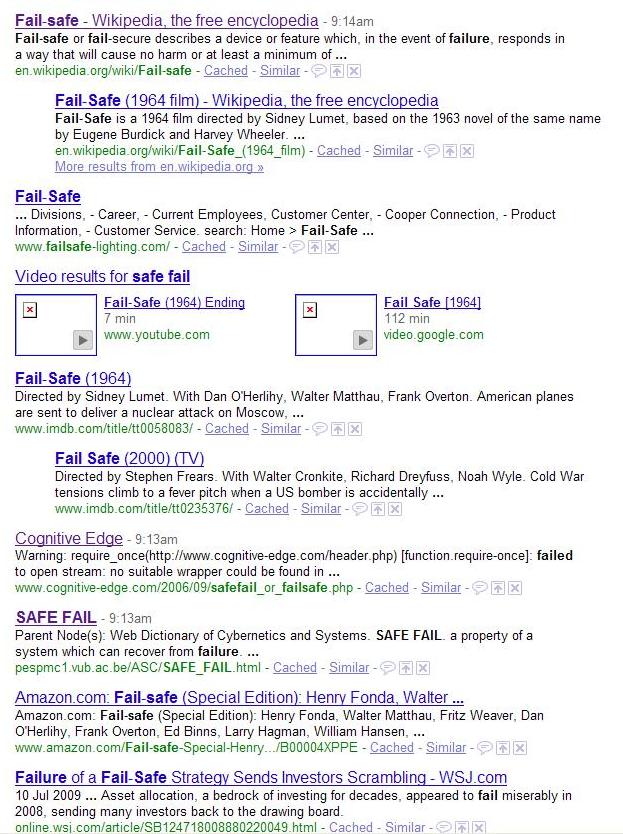 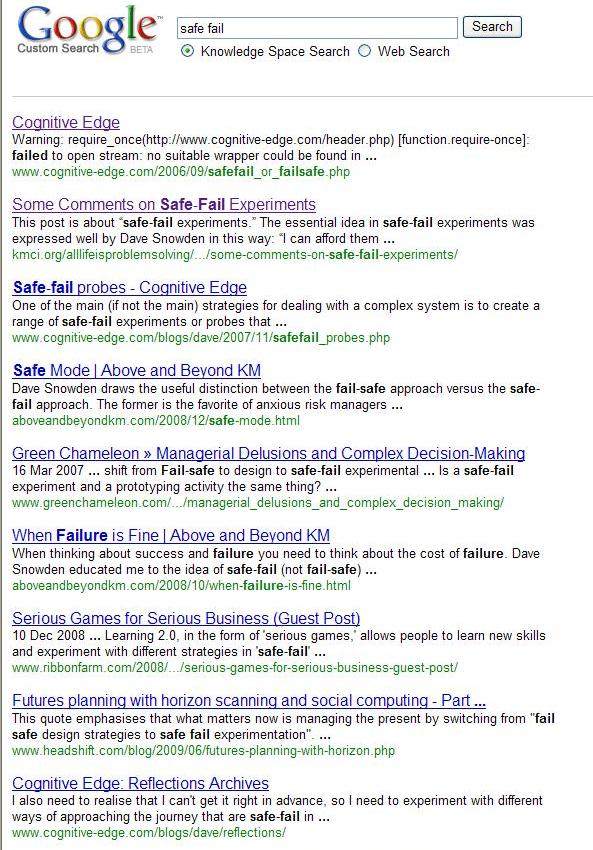 You can see that Google does not distinguish between Fail Safe and Safe Fail due to I guess proximity of terms, and the first real distinction is coming in the 7 the item of result set.

I think  the underlying blogs/sites will need to be kept updated on a regular basis with newer and fresher resources, which I think is not a huge effort considering the fact that my google reader feeds is still under 100.

Here is a list I thought would be relevant to build skills/mature on specifically for community leaders.

I think there is more than what I have outlined above, and it is in the complex domain…

Each one of us have an inherent capacity to do something well and when done, feeling happy and satisfied about it. The conditioning, education, brought up, or corporate job has this effect of making you forget or move away from that inherent capacity. When your day job caters to that your working hours becomes a joyful experience.

What is your inherent capacity?

You want to wake up at 4 am, if you can do it yourself well and good, but if you need an alarm clock to wake you up, that is the role of a Guru.

It was a pleasure to learn Transcendental Meditation of Maharishi Mahesh Yogi from Lane Wagger. The guru bhakti (devotion), dedication to help the seeker, coupled with clear concept delivery were awesome.
The way Lane oriented people to practice and shared some excellent analogies (must have been refined over the years) was really good. I distinctly remember the analogy of dyeing a white cloth in yellow to explain the cumulative effect of TM.All in all great and I have been practicing it once a day as against the recommended 2 per day schedule, but clearly see changes in how people respond and relate to me.
I highly recomend Lane to any Corporate if you are serious about TM. Right most on first row is Lane.
Here are a few points from Lane for the practitioners
1. Remember to start your TM with half a minute sitting easily, and end the meditation with 2-3 minutes of silence.
2. If you feel sleepy during TM, that is OK. Sleep comes during meditation if there is some tiredness in the body. We never force ourselves to stay alert in order to continue thinking the mantra. If sleep comes, we let it come. Just remember to meditate for another 5 to 10 minutes after waking up.
3. We do not give any importance to the meaning of thoughts during TM. Thoughts are just the by-product of the release of stress. When a thought comes during TM, we don’t feel bad, we just easily return to the mantra.
4. If you feel you are too busy to do your TM, then don’t do it for yourself, do it for the sake of world peace.